In October of 2021 my wife and I went to Disney World for their 50th Anniversary celebration! We flew on Frontier Airlines and on the way to Orlando we had no issues. I was able to explain to the ramp attendants where to touch my wheelchair so it would not cause any damage and my chair arrived at Orlando safe and sound. 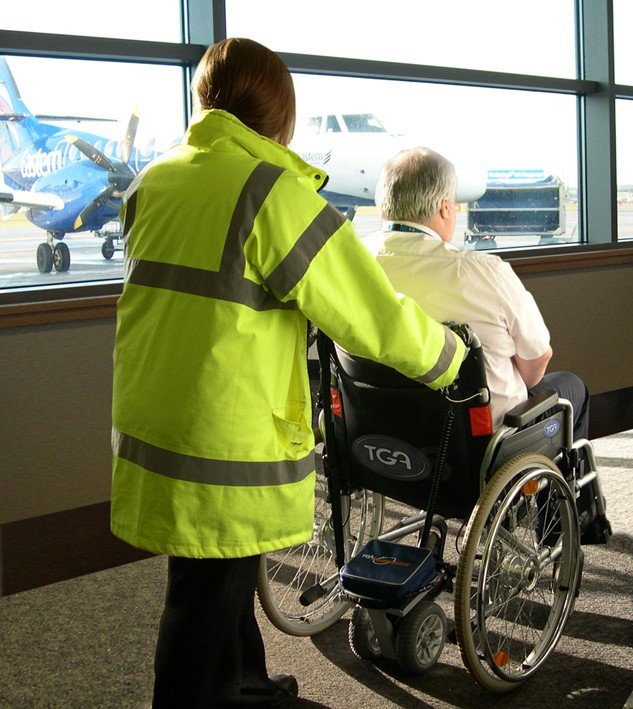 Airport Agent Pushing a Traveler In another newsletter I will tell you more about Disney and our trip! However on the way back home, when I was talking to the attendant at the Orlando Frontier gate trying to explain where to touch the chair he was having trouble listening to me because of the sound of the airplane engine. Before I could tell him to not put all of his body weight on my armrest, that is exactly what he did. The armrest at this point broke and fell downward where I could not reach the hand control to operate the wheelchair. I tucked the hand control inward into the chair as best as I could so that no more damage could be done to the wheelchair while in flight to Philadelphia.
Once we landed in Philadelphia International Airport. We went straight to the lost baggage claim Center for Frontier Airlines. The lady at the desk helped us submit a damage report. Similar to a incident report, She requested to see the damage asked where the chair was damaged and took down all of my information. They asked if I needed a loner chair which thankfully I didn't because I kept my old power chair when I received my new one.

(Tip: Always keep your old chair if you don't already have a spare. and even if you do keep it and post it for another person to purchase or even better donate it to an organization that will repair it or give it to someone in need like Devices 4 the Disabled!)

The next day I received a message from a third party representative (this is the company that Frontier Hires to help them fix the damages to wheelchairs they brake.)

I was surprised I received a call so quickly. The lady on the phone had me explain to her again what happened and what parts were damaged. she then scheduled an appointment with a technician to come out and look at the damage and fix on the spot any damages done to the wheelchair. The technician then fixed my armrest on the spot thankfully it was just a broken screw that he happened to have in the truck and my headrest was damaged also so he ordered a new one. Frontier airlines actually did a pretty good job overall in the process of communication, repair and empathy towards the situation. My chair was completely fixed in about 3 weeks, and the third party vendor was in communication with me the whole time, and continuously asked if things were fixed to my liking.

I have to say that I am pretty impressed with their response but not in their compensation. Frontier Airlines did not communicate directly with me; only the third-party vendor that was hired by them communicated with me. When I submitted my complaint to the ADA.GOV, Frontier airlines responded with an email that was condescending, and pretty much said in my words "hey, according to the regulations we completed our end of the deal, we broke your chair, and we fixed it, there for we are in compliance. here is $100 dollars for your three weeks of inconvenience and be on your way! " Or at least that is how I felt when I read their letter, you tell me what you think? 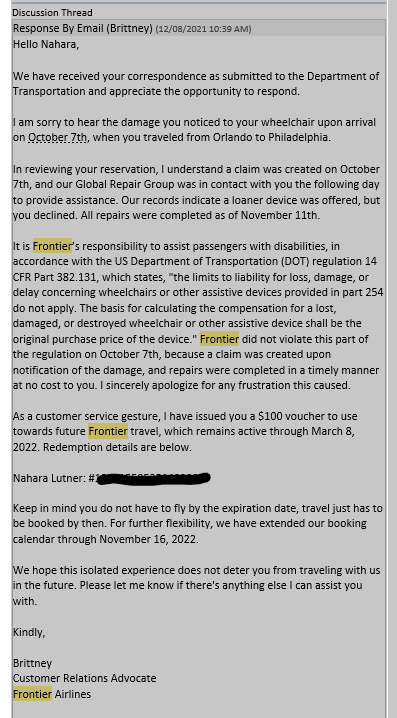 Have you had a damaged wheelchair while traveling? what was your experience like? Let me know by sending in an email or replying to this story on my Instagram using #dontbrakemywheels so we can get the stories out there and hopefully cause some change. If you know of someone who would like stories like these please share and have them subscribe!